PHOTO: Adele Charalambous was surprised to learn that certain defects in their newly purchased home were not required to be fixed by the former owner. (ABC News: Emily Piesse)

Adele Charalambous and her husband had been looking for a new home for two years when they made an offer on a 1930s character home in the Perth suburb of Nedlands.

In January, the pair moved in, despite a litany of defects having been picked up in the pre-purchase building inspection report they commissioned.

“It was a 36-page report, of which 27 pages detailed about 35 defects,” Ms Charalambous said.

All bar two of the defects — including problems with the roof and a tilted boundary fence — were not deemed to be structural, and were therefore not covered under the standard annexure issued by the Real Estate Institute of WA (REIWA).

While the sale proceeded, Ms Charalambous said the experience had been “a little confronting”.

“Our biggest learning out of this process was the fact that we weren’t clear — or … weren’t particularly well informed — in terms of what does a structural defect mean?”

PHOTO: It is hoped a pre-purchase building inspection report could alleviate conflict between buyers and sellers. (ABC News: Emily Piesse)

Under the REIWA annexure, if a structural defect is detected, the seller of the property is obligated to either compensate the buyer or remedy the defects using a registered builder. But the definition of structural defect is narrow in scope, according to Elias Oostveen, a registered builder who operates building inspection company Home Integrity.

“People don’t understand. We deal with lawyers and doctors, really smart, professional people, but when it comes to building terminology, I think people just make up their own mind [about] what building and structure mean,” he said.

Defects that are not considered structural include sagging ceilings, leaking shower recesses, problems with the roof (other than the roof frame) and rising damp.

“A non-structural defect might be no heat shields to down lights,” he said. “If debris or insulation come into contact, it’s a huge fire hazard. We have to put it in the report … but people are very confused.”

That confusion has motivated Mr Oostveen to draft a new annexure, which allows buyers and sellers to specify what will be covered in the inspection.

“If they’ve come from a house that’s had a leaking roof or leaking shower … there’s a section where they can insert ‘we want the roof cover checked’,” he said. “There’s also a section for the seller to sign that, so if the seller doesn’t want to be liable for fixing the roof, they just cross that section out.”

PHOTO: Elias Oostveen says too many property buyers and sellers are unclear about their responsibilities. (ABC News: Emily Piesse)

Real estate agent Peter Robertson, who worked on the draft annexure with Mr Oostveen, said he believed the new document would help reduce conflict between buyers and sellers.

“It used to be caveat emptor, buyer beware. [That] doesn’t exist anymore, so my job as an agent is to make sure that we have a really good, really clear transaction where everybody understands what they’re getting and what they’re giving,” Mr Robertson said. “I would expect the industry will look at this and embrace it as a good idea.”

‘We want to make sure they’re protected’: REIWA

However, newly elected REIWA president Damian Collins said REIWA does not “see any need, as it currently stands, to change the annexure very much”.

“We’re open to amending our annexure, but obviously we’ll take the feedback of the [REIWA] members based on their feedback with the public,” he said. “The issue is, what’s a structural defect? You cannot define that definitively, and so we’re thinking that maybe the qualification level might need to be looked at.”

In Western Australia, there is no formal qualification or regulation defining who may be a building inspector, in contrast to other states. However, that may be about to change, with REIWA considering new rules to ensure inspections are performed by a qualified professional.

Mr Collins said the organisation was looking at several options, including inserting a clause in the standard annexure to allow inspections by registered builders only.

“When people are buying their biggest asset, we want to make sure that they’re protected and that the qualified people are making the assessments, whether something is structurally sound or not,” Mr Collins said.

PHOTO: Many buyers do not understand what is considered a structural defect and what is not. (ABC News: Emily Piese)

REIWA said it did not have a timeframe for voting on the changes, but planned to canvass its members in the months ahead. For Mr Oostveen, that decision is overdue.

“People are very surprised when I explain … that you don’t need to be licensed,” Mr Oostveen said.

Is your leaking shower costing you more than it should? 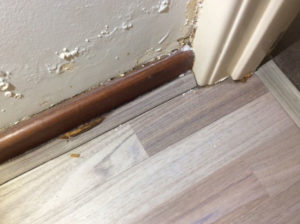 You may have seen the bubbling discoloured paint which can be the result of water leaking from the shower through the wall, leaving soft plaster that will eventually crumble and fall off. Often we don’t even notice it happening if the shower backs onto a walk in robe and the wall is hidden with a row of hanging clothes. Or a full wall of bookcases might keep the offending area hidden from view. It may only be when we notice a room smelling musty that we go in search of the cause.

If a shower recess has been leaking for some time, and the environment is conducive, a leaking shower recess can promote mould which can result in unhealthy allergens developing i.e. a health hazard. 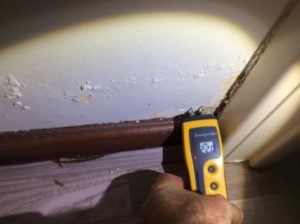 Unfortunately this is something I see on a regular basis during my pre-purchase building inspections and Pre Settlement inspections, and not just in older homes.

Tiles and grouting are not waterproof.If installed correctly, it is the protective membrane underneath that provides the waterproof barrier.In extreme circumstances, it could be structural movement that will tear or cause the waterproof membrane to fail.Over time and with constant use, the water eventually seeps under the membrane to cause damage.

Other reasons you might end up with a damp problem are:

In WA, our extremes of temperature cause swelling and shrinkage which can also lead to movement, which in turn can cause cracking and various other issues around the home. 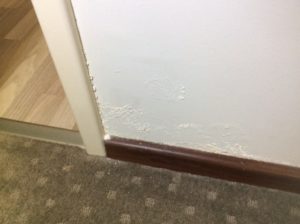 A simple test and a trained eye will highlight if there are any moisture issues in your bathroom or ensuite, so the problem can be rectified before an expensive major repair is required.

A Home Integrity Registered Builder can also inspect and report on spas and swimming pools including safety barriers, arrange retrospective approvals on all structures by local Councils and Shires, inspect and report for insurers to take out Home Owner Warranty Builders Warranty Insurance, Handover and Defects Building Inspection Reports, and Building Consulting.

Don’t risk your inspection to a ‘licensed’ building inspector!

When we purchase a property we may make modifications to fit our family and lifestyle. Sometimes they are simply changing the décor by painting, or new window furnishings. At other times they are major renovations to make the flow of the house work for the way you live. Regardless of the age of the home, it’s often difficult to tell on the surface if there have been modifications made to the original building. Some will engage a builder for advice, or have a structural engineer examine the plans, but in the interests of saving money, the owner may tackle the job himself even if he doesn’t have any experience.

I see some concerning situations during my inspections, and some downright dangerous renovations. Last week was one where I uncovered some pretty serious defects, where the sellers for each of the properties explained to me what I commonly hear from time to time; “I don’t understand, I had a building inspection completed when I bought the place, and haven’t made any changes”. All I can put this down to is that maybe the inspector was not qualified, was very inexperienced and/or didn’t inspect the roof void thoroughly enough. That is why Home Integrity building inspections are carried out by an experienced registered builder. With Pre-Purchase building inspections it’s really important to inspect all safe accessible areas, no matter how dirty or uncomfortable it may be.

In Western Australia, there are no licensing requirements for building inspectors. If someone is presenting themselves as “licensed” you should be cautious. Check the qualification of the person actually conducting the inspection. Builders in Western Australia are registered with the Building Commission and will also have a Builders Registration Number. Don’t be confused by some of the “licensed” building inspectors around. The “license” may just refer to the ability to operate in a specific location.

What Our Clients Have to Say…

The report seems to be very thorough with some problem areas identified.

Thank you for your prompt and efficient service.

The report seems to be very thorough with some problem areas identified. Thank you for your prompt and efficient service.