Will your roof cave in because of Hairy Timber (chemical delignification)? The answer may surprise you! 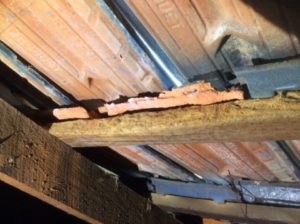 Hairy timber, fluffy batten or furry batten. We see these from time to time when conducting building inspections in Perth, WA and the more technical term to describe these hairy timbers is a process known as ‘chemical delignification’. Chemical Delignification can occur to timber roof battens and other roof timbers visible from within the roof void.

We have had an increasing number of enquiries from home owners after chemical delignification has been identified in their roof void by a building inspector. They are told by others that the chemical delignification is a major structural defect, a safety hazard and told not to walk on their roof for risk of it “caving in”. In many cases, this information is not correct. The roof voids we have been asked to inspect after being told “the roof could cave in” have been fine. As you can see in this video.

What is Chemical Delignification?

Lignin is the natural glue that holds the fibres of wood together. When the lignin is broken down the fibres then detach from each other creating a visible hairy surface

to a section of the timber. Chemical Delignification damage is most commonly found in timber sections used as roof tile battens of buildings that are located in close proximity to the sea, or major roads that have heavy traffic. We have found terracotta tiled roofs are more prone to Chemical Delignification to the timbers due to the porosity of the terracotta tiles which puts the battens through a wetting and drying cycle.

The affected layer (the furry bit) is generally only very thin. Because the surface fluffs up, it looks a lot worse than the minor 0.2 mm or so in depth that is affected. The actual timber is still strong – it’s simply just a tiny bit smaller. Tile battens are installed as green or unseasoned timber. Any minor reduction in physical size is more than offset by the timber now being dry or seasoned and this is generally stronger than green or unseasoned timber.

Chemical Delignification is regarded as typical material deterioration or a condition consistent with the age of the building. In other words, if you buy an old house, expect some building elements to have deteriorated.  Also, the Australian Standard 4349.3 – 2010 Inspection of Buildings Part 3 Timber Pest Inspection does not classify delignification as a timber pest.

Some building inspectors are recommending fumigation, to stop the apparent risk of their roof “caving in”. The fumigation process does make the furry bits go away, and provide some level of timber preservation. The treatment in most cases is unnecessary and very expensive.

So, if an inspector is recommending fumigation because of delignification, be wary and get a second opinion.  Don’t be fooled, save your money, and if in doubt get Home Integrity to take a look.